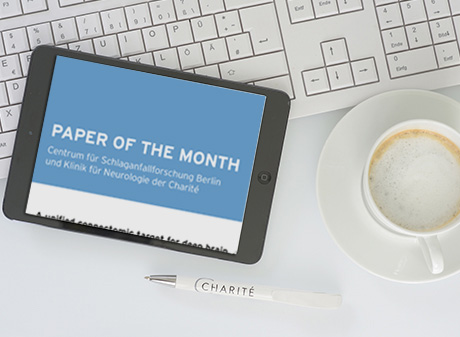 Subarachnoid hemorrhage (SAH) is the second most common hemorrhagic stroke. Focal brain damage after aneurysmal SAH predominantly results from intracerebral hemorrhage, and early and delayed cerebral ischemia (DCI). Most commonly, delayed infarcts occur around day seven. In DISCHARGE-1, which enrolled patients with severe SAH, we found that the average patient admitted to the neurocritical care unit after aneurysm treatment had already lost 46.3±72.6 mL of brain tissue and lost an additional 36.3±80.1 mL over the next two weeks because of delayed infarcts.

DCI is a potentially modifiable etiology of focal damage during neurocritical care, as it allows treatment of patients with a neuroprotective intervention before the possible insult or shortly thereafter. The risk of DCI is particularly high after severe SAH. Such patients are often comatose, which limits neurological assessment. Therefore, in the high-risk population, it is particularly difficult to identify and treat those patients who suffer from the complication. However, neurosurgical procedures are indicated early after SAH, allowing implantation of invasive probes. This enables recording of the entire period of infarct development, early treatment stratification according to changes in diagnostic summary measures recorded by neuromonitoring devices in real time, and then re-assessment of these measures after neuroprotective interventions.

Spreading depolarization (SD) is the electrophysiological correlate of the initial, still reversible phase of neuronal cytotoxic edema in the cerebral gray matter. SD is imaged experimentally as a wave of diffusion restriction with MRI or neuronal swelling with two-photon microscopy. Neurons die if depolarization and cytotoxic edema persist, as determined by a negative ultraslow potential in electrophysiology and continued diffusion restriction on MRI. Therefore, it has been suggested that SD may serve as a real-time mechanistic biomarker for impending parenchyma damage after SAH.

Objective of the prospective, observational, multicenter, cohort, diagnostic phase III trial, DISCHARGE-1, was to estimate a cutoff value for the peak SD-induced depression duration that indicates delayed infarcts as assessed by longitudinal neuroimaging. Our concept is that an automated detection system will in the future trigger an alarm as soon as the cumulative SD-induced depression in the sliding window of the just-past 24h-period exceeds a cutoff to initiate treatment before the injury has progressed to infarction. While in awake patients, the 60-minute-cutoff of cumulative depression in a 24-hour window indicated reversible delayed neurological deficits, only a 180-minute-cutoff indicated new infarction with >0.60 sensitivity and >0.80 specificity. Although spontaneous resolution of the neurological deficit is still possible, we recommend initiating rescue treatment at the 60-minute- rather than the 180-minute-cutoff if progression of injury to infarction is to be prevented.

Jens Dreier is professor at the Center for Stroke Research Berlin and Oberarzt in the Neurological Hospital of the Charité with a focus on translational stroke research.

Johannes Woitzik is director of the Department of Neurosurgery of the Evangelisches Krankenhaus Oldenburg and professor of the University of Oldenburg with a focus on translational stroke research.

Each month the CSB directors select the paper of the month from the publications of the Center for Stroke Research Berlin and the Department of Neurology with Experimental Neurology of the Charité.