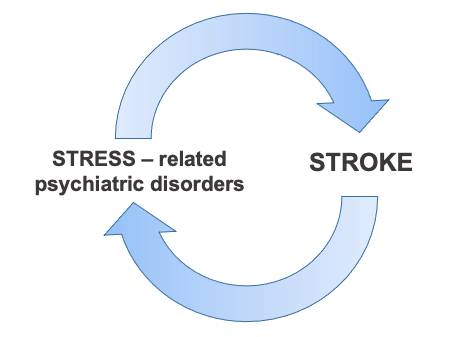 We seek to make further inroads into understanding the complex interaction between depression and brain ischemia at a mechanistic level.

Psychiatric disorders including depression and post-traumatic stress disorder (PTSD) may develop secondary to somatic illness, e.g., after a stroke. However, there is growing evidence of a bidirectional relationship between neuropsychiatric disorders and stroke. Hence, depression can occur both as a cause and as a consequence of stroke.

Serotonin seems to act as an important mediator of post-stroke repair by driving regenerative processes such as neuronal plasticity and by modulating the brain’s inflammatory response to ischemic damage. Therefore, we speculate that antidepressant treatment using 'selective serotonin-reuptake inhibitors or enhancers' (SSRI or SSRE) after stroke may emerge as a novel therapy. We use genetic models (e.g., Tph2 knockout mice lacking brain serotonin, SERT knockout mice) and pharmacological interventions (SSRI, SSRE) to elucidate the effects of serotonergic signaling on acute and chronic stroke outcome.

Furthermore, we recently finished the SATURN study, an exploratory and retrospective cohort study (ClinicalTrials.gov Identifier: NCT03496480). Eligible stroke patients were asked to participate in a postal survey to assess traumatization before stroke as a risk factor for neuropsychiatric complications after stroke.

We found that a history of trauma exposure in tandem with endorsing subsequent PTSD symptoms was linked with significantly increased post-stroke PTSD and depressive symptoms together with decreased psychological well-being. Furthermore, younger age, being a woman, and having developed PTSD symptoms in the aftermath of a prior trauma were associated with adverse psychological outcomes after stroke.